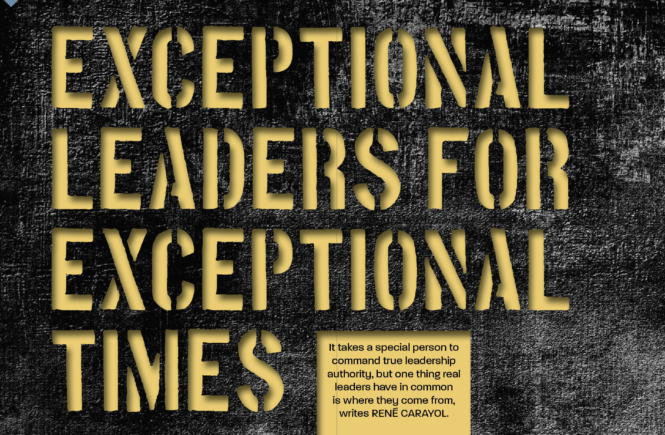 It takes a special person to command true leadership authority, but one thing real leaders have in common is where they come from, writes René Carayol.

With the sudden and tragic death of Princess Diana, the Queen struggled to find the appropriate response. She was seen to be stiff and incredibly out of touch with a nation that was in convulsive shock at the sudden and gruesome death of the ‘People’s Princess’.

This was probably the moment that made the then Prime Minister, Tony Blair. He totally caught the mood of the nation and hardly anyone will forget his near perfect intervention, as he represented both emotionally and authentically, how the common people felt. It took a few years for the Queen to recover her place in our hearts, as her scripted, wooden and emotion free addresses damaged her reputation.

In a crisis, what’s needed more than anything else, is the ability to emotionally connect with victims who feel aggrieved and neglected. It is always empathy and EQ over strategy and IQ. Theresa May emphasised this with a bumbling and baffling performance in front of the victims of the Grenfell Fire.

Her desire to be in complete control and a style of wanting to manage everything, left her looking and feeling completely out of touch. Her guarded and cautious approach was misconstrued as uncaring and robotic. On the other hand, Jeremy Corbyn, benefited from his career of constant protesting against the establishment and his ability to whip up a like-minded audience. His visits to the scene of the fire were met with rapturous applause and cheering, as he had no high-profile security in sight, and wandered around amongst the people without ‘suited and booted’ official advisers. He was tactile and not afraid to hug or cry with his emotionally wrought soon to be ‘followers’.

In a crisis, what’s needed more than anything else, is the ability to emotionally connect with victims who feel aggrieved and neglected.

Where are our true leaders today? We are not talking managers or experts who rely on process, data, strategy and intellectual prowess. There are more than enough technocrats or bureaucrats for later on – this is time for authentic leadership. Why the hell was Sir Martin Moore-Bick chosen to lead what was always going to be an emotionally charged review of what actually caused the Grenfell fire, and vitally identify who was to blame?

As ever, the criteria for the chosen person had nothing to do with leadership or empathy. He was chosen because of his track record of being straight talking, hard hitting and an honourable judge. He would take no prisoners in getting to the bottom of what actually happened.  Maybe, but that is not enough on its own.

What is really needed is the ability to take all the people with them. This is less about intellect and so much more about EQ and being seen to be able to connect, empathise and most of ‘walk in the shoes’ of the victims. This is Leadership.

Unfortunately, in these times of growing global uncertainty, we need inspired leaders more than we have ever before, but we have fallen in to the bad habit of looking for the ‘cleverest person in the room’ or someone who is “strong and stable”. Justin Trudeau and Emmanuel Macron may well be more the model we are looking for today. They know how to emotionally connect, and unlike Theresa May and Sir Martin, they can adapt their message to meet the atmosphere prevalent in any environment they may enter – no matter how hostile.

It is true to say the David Cameron, Tony Blair, Bill Clinton and perhaps the master, Barack Obama could also reach and touch people when necessary. In a weird sort of way, Donald Trump has this capability as well, and even stranger, so does Vladimir Putin. They do have a subtle difference though, much like Jeremy Corbyn, they know how to play their ‘base’. They rarely look to perform in enemy territory.

This is the direct benefit of having a large, trusted and totally predictable base that they play to and perform to. As we can see from recent events, that is perhaps never enough on its own. Over time, those they never bother trying to connect with can bring them down.

If all we bring to the problem is hope, then we have made a positive difference already.

Hilary Clinton was probably the object lesson in how to throw it all away, despite an overwhelming lead, because she was a technocrat with zero EQ and an inability to empathise with large audiences, despite being able to do it on a one to one basis.

If all we bring to the problem is hope, then we have made a positive difference already.

Today, leadership is no longer about rank or hierarchy, leaders can be found anywhere, to prove the point, the ideal leadership role models for today are mothers at home.

Mothers have exceptional emotional intelligence and an empathy with all whom they support, nurture and lead. This is far different to a learned skill or ‘competency’, it’s a way of life – the natural order of things. And vitally, it’s just what is required in terms of leadership in these volatile times.

More inclusive and connected leaders are the way forward and we have a huge and largely untapped reservoir of leadership talent readily available – women.

The perennial question that is always asked about leadership; are leaders born or are leaders made?  I put it to you, that the answer is neither. Leaders are not born and they are not made – they are found. When we start looking for those who can influence and persuade without authority, we know we are on to something.

Who would have thought that an African American, trained as a lawyer at Harvard, who had spent his formative years as a community organiser would emerge to become the President of the USA? Through his ability to connect in an inclusive manner, he navigated the nation through the toughest and steepest global recession seen in generations.

Give me EQ and energy over IQ and strategy every single time.

There only one thing worse than no leadership and that is poor leadership.