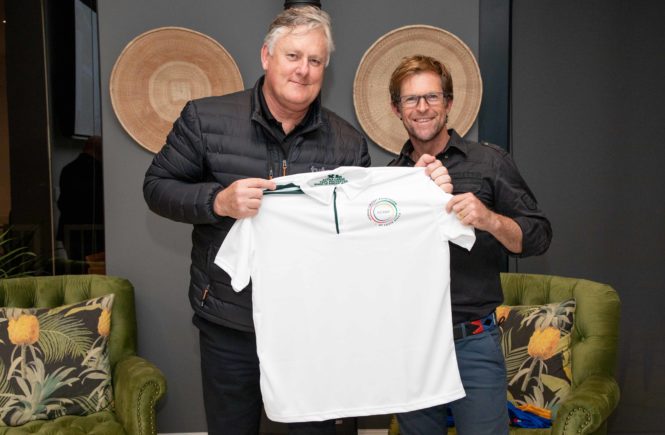 The inaugural Veterans Cricket League for players over 40-years-old kicks off in Cape Town this week.

The intention is to develop veterans cricket and identify players who can be considered for future Over 50’s Cricket World Cups, the first of which was held in Australia in November 2018, with Australia winning in a gripping final against Pakistan. The next tournament is to be held in Cape Town in March 2020.

Evergreen Lifestyle and the Veterans Cricket Association of South Africa (VCASA) have announced their partnership at the launch of the first local veterans cricket league for Over-40s: the Evergreen Lifestyle Cape Veterans T20 League. As ambassador of the event, ex-Proteas player Brian McMillan was in attendance, along with Jonty Rhodes.

Eight teams will play in the inaugural 7-round league, matches will be played, using pink balls, on Wednesdays from 16-October to mid-February 2020 starting at 4pm.

The initiative is part of VCASA’s objective to start similar leagues throughout South Africa in order to keep cricketers playing the game so ensuring that they will be eligible for international veterans tournaments in the future.

“Evergreen is a sports-loving lifestyle brand so we are delighted to partner with VCASA to promote veterans cricket in South Africa – and we believe in the value it will add to veterans cricket and the residents at our villages,” says Arthur Case,” Evergreen Brand Marketing Director. “To top this off, the prospect of welcoming cricket legends from around the world to Cape Town next year is very exciting.”

“The prospect of welcoming cricket legends from around the world to Cape Town next year is very exciting.” – Arthur Case, Evergreen

The matches will be played in Cape Town, Stellenbosch and Franschhoek on mostly Premier League club, school and university grounds with the final at Newlands Cricket Ground.

These former Proteas – Jonty Rhodes, Alan Donald, Fanie de Villiers, Dave Callaghan, Meyrick Pringle and Alan Dawson – have raised their hands in support for selection to the SA team, along with other South African cricketing legends.

The Veterans Cricket Association of South Africa is also awaiting final approval of its application to become an ancillary member of Cricket South Africa.

More importantly, VCASA will provide opportunities for those cricketers who never had the chance to represent their country at international level because of the apartheid regime. Recently retired players such as Makhaya Ntini, Shaun Pollock, Jacques Kallis will have the opportunity to represent South Africa once again thanks to the introduction of the VCASA platform.

The 2020 tournament has adopted the Boucher Legacy as the charity benefactor. Headed up by former South African cricketer Mark Boucher, The Boucher Legacy was founded in 2012 when Mark retired from international cricket and turned his passion and commitment to wildlife conservation, in particular, to preserve our endangered rhino population. The South African Rhinos, which was the name given to the team which played in the 2018 tournament donated R100 000 to The Boucher Legacy after the tournament.  The second beneficiary – Save our Rhinos – is an Amdec Group project that was initiated by the Amdec Group’s chairman, John Wilson. A keen and accomplished photographer and wildlife conservationist, Wilson is spearheading the Save Our Rhinos project.