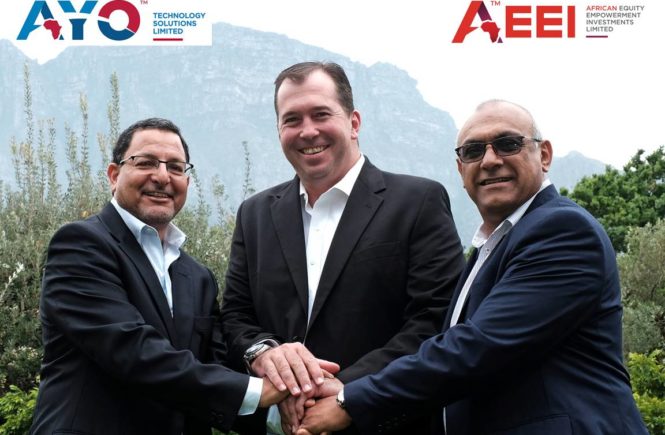 AYO has grown significantly over the past few years, with a substantial 182% increase in growth in revenue during the last financial year, with a sizeable market cap of its own. AYO also has an excellent platform to launch from, leading to further organic and acquisitive growth.

Hardy, who officially takes up the CEO position on 1 December 2017, is a seasoned and respected ICT professional, former Managing Director of British Telecommunications – Africa.

Amongst other roles he has played a key role in developing and growing digital inclusion across Africa. He will be responsible for driving AYO into its next significant growth phase. The AEEI board also recently approved plans for AYO to be listed separately on the main board of the JSE.

Mr Khalid Abdulla, Group Chief Executive Officer of AEEI and outgoing executive chairman of AYO says: “The AYO board of directors decided that the time has come to appoint a focused individual to drive the next phase and build further growth for AYO. By appointing a Chief Executive who has the requisite ICT knowledge, coupled with management experience, we are able to firmly drive the business into the digitised IT Revolution.

“This we found in Kevin Hardy, who is a forward thinking people’s person and someone who shares the same values as we do at AEEI. I look forward to working alongside him in expanding AYO’s scope and influence in line with our Group Vision 2020 Vision strategy.”

Hardy comments, “I am honoured to be appointed as Chief Executive Officer of AYO and I look forward to being a part of the dynamic AEEI team, using my skill set and experience to grow and innovate the AYO Group of companies. AYO has grown over the past few years and I am excited to take it through its next exciting growth phase, increasing its market share in South Africa, the continent and beyond.”

“AYO has grown over the past few years and I am excited to take it through its next exciting growth phase, increasing its market share in South Africa, the continent and beyond.” – Kevin Hardy

A further significant change to the board of AYO was also announced, as Khalid Abdulla stepped down as Executive Chairman of AYO, handing over the reins to Mr Salim Young as the Independent Non-Executive Chairman, in line with good corporate governance.

Young, a corporate lawyer and former director of Webber Wentzel, recently retired after a very successful 12-year stint as an Executive Director on the board of British American Tobacco SA. He is also the Deputy Chairman of the board of directors of AEEI and has contributed meaningfully to the strategic direction and growth of the Group over many years. He currently chairs AEEI’s remuneration and audit committees.

Congratulating Hardy on his appointment Young commented: “Kevin joins AYO at an exciting time in the company’s growth cycle. I have no doubt he has the necessary qualifications, experience and determination to navigate AYO through its next growth phase, as the company prepares to fully embrace the Digi-sphere.”

Concluding, Abdulla remarked: “The technology sector underpins every aspect of modern life and Kevin and his team are well placed to take advantage of the abundant opportunities this represents. Africa is a hotbed of innovation right now and together, we look forward to discovering and realising its full potential.”

AYO (meaning joy and happiness), offers an array of services in the Information Technology and telecommunication sector. The Group also holds a 30% stake in British Telecoms SA. AYO currently holds a 25% market share of the South African public hospital sector and manages the country’s national health laboratories. The Group also boasts blue-chip clients and partners such as all the major banks, Nokia, Siemens, Cisco and Microsoft.

AYO is preparing to list shortly and once listed, will be the largest Black Economic Empowered ICT Company in South Africa, which will also enable the company to increase its footprint across the African continent and beyond.