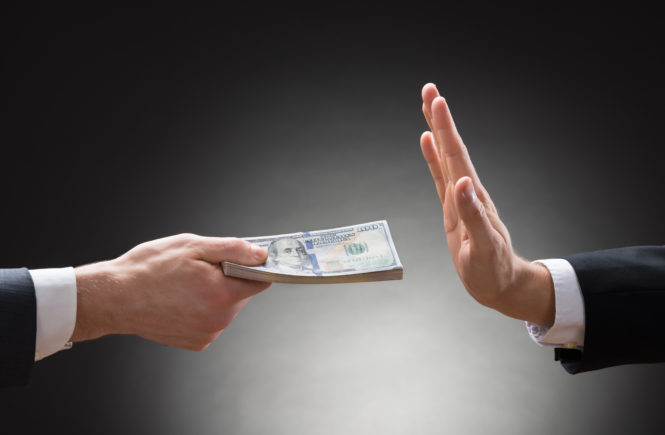 Although it is certainly a positive development and affirms the legislature’s commitment to ridding society of the scourge of corruption; there are a number of areas where improvements could be made. We set out below the most notable aspects of the Bill as well as some possible areas for improvement (where applicable). The public has an opportunity to provide comments on the Bill by 8 January 2018.

The Bill introduces an “immunity” provision in relation to the existing obligation in section 34 to report knowledge of, or a reasonable suspicion of corrupt activity. This provision states that: “A court may find that any person who bona fide filed a report as contemplated in subsection (1) may not be held liable to any civil, criminal or disciplinary proceedings in respect of the content of such report” [our emphasis].

Although this is a positive amendment, and ought to encourage persons in authority to become more proactive in reporting corruption within their organisations, it is apparent that the “immunity” is not absolute and courts are given discretion to determine whether immunity should be awarded. Creating a non-discretionary immunity when prescribed criteria are met may better serve to assist in ensuring that corruption is exposed. The Bill is also silent on the criteria for reasonable knowledge or suspicion which aids the making of a bona fide report. Further details of what will be considered reasonable should also be provided.

Creating a non-discretionary immunity when prescribed criteria are met may better serve to assist in ensuring that corruption is exposed.

The Bill proposes to place an onerous obligation on persons who find themselves in a position of authority, as defined in PRECCA, to implement internal compliance programmes to ensure offences are detected and reported.

The Bill also seeks to introduce facilitation payments as an offence by including it in the definition of gratification. A facilitation payment is understood to entail paying a person to make them act in a specific way or to bring about an unfair or unlawful advantage.

Under PRECCA – only guilty individuals were fined for an offence under PRECCA. The Bill, however, seeks to introduce an element of corporate liability and the sentencing of a corporate body. The Bill also seeks to confer authority on Regional and Magistrate’s courts to sentence a perpetrator of an offence to both a fine and imprisonment. The Bill proposes introducing maximum fines payable for an offence under PRECCA; that is to say that a Regional Court may impose a fine not exceeding ZAR 50 million and a Magistrate’s Court may impose a fine not exceeding ZAR 10 million. The Bill also introduces guidelines that a court must take into account when imposing a fine on a corporate body. In this regard the fine must reflect the seriousness of the offence, the amount of the gratification paid, the benefit derived and the annual turnover of the corporate body.

The Bill would be improved if it provided the High Court with authority to sanction both a fine and imprisonment for an offence under PRECCA. It may also be useful to provide a guideline on the weighting to be attached to each of the criteria listed for determining the appropriate fine on a corporate. The Bill also fails to define when a corporate entity will be held liable for an offence of corruption and not its agent. It would be useful if more clarity on this issue was provided.

The Bill also fails to define when a corporate entity will be held liable for an offence of corruption and not its agent. It would be useful if more clarity on this issue was provided.

The Bill also proposes to extend the territorial effect of PRECCA. It gives a court, in whose jurisdiction one/more elements of the crime [offence] have been committed, jurisdiction to try such an offence.

We will keep you updated on key developments in relation to the Bill.