Funding the next leg 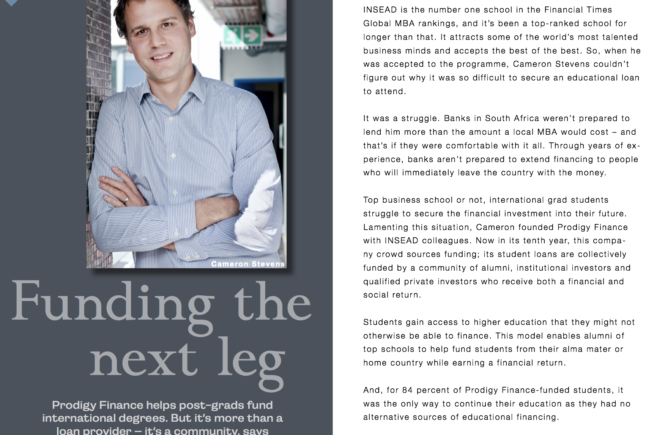 INSEAD is the number one school in the Financial Times Global MBA rankings, and it’s been a top-ranked school for longer than that. It attracts some of the world’s most talented business minds and accepts the best of the best. So, when he was accepted to the programme, Cameron Stevens couldn’t figure out why it was so difficult to secure an educational loan to attend.

It was a struggle. Banks in South Africa weren’t prepared to lend him more than the amount a local MBA would cost – and that’s if they were comfortable with it all. Through years of experience, banks aren’t prepared to extend financing to people who will immediately leave the country with the money.

Top business school or not, international grad students struggle to secure the financial investment into their future. Lamenting this situation, Cameron founded Prodigy Finance with INSEAD colleagues. Now in its tenth year, this company crowdsources funding; its student loans are collectively funded by a community of alumni, institutional investors and qualified private investors who receive both a financial and social return.

Students gain access to higher education that they might not otherwise be able to finance. This model enables alumni of top schools to help fund students from their alma mater or home country while earning a financial return.

And, for 84 percent of Prodigy Finance-funded students, it was the only way to continue their education as they had no alternative sources of educational financing.

Tariro Goronga is one such student. Zimbabwean-born, he was raised on a farm in South Africa and received his undergraduate degree in electrical engineering from the University of KwaZulu-Natal. Having spent his formative years without access to electricity, he was determined to attend a top international business school to develop the network and business acumen to work towards ensuring every African child has access to this resource.

His admittance to Harvard Business School was just the first step in that process. He considered loans from South African banks, but they weren’t right for him. Indeed, the high rates of interest might have made accepting one prohibitively expensive. And he was one of the lucky ones.

After an American undergraduate degree, Farai Mwamuka worked in South Africa for five years before an MBA became the next obvious step in his career. He applied for and received a Prodigy Finance loan after his admission to London Business School. And, he’s not sure he would have made it to campus otherwise.

While developing the foundations of the company, Cameron considered the obstacles that stood in the way of his own education. An MBA from a prestigious institution almost always confers a higher income, but banks aren’t equipped to consider a possible future scenario; they only look to past earnings. Prodigy Finance developed a predictive model that considers the bump up graduates receive when they re-enter the job market, allowing them to extend higher amounts than students would otherwise obtain.

Another aspect of the Prodigy Finance business model is the community dynamic that underlines everything it does. It’s not just a loan provider; the company continues to enhance the student experience by hosting live talks, webinars, and networking events across the globe. The community team assists arriving students with airport-to-campus transfers and local SIM cards for their mobile phones.

The personal engagement is evident from the moment applicants interact with Prodigy Finance. And, for Farai, that connection is inspiring. “It makes me feel good that the reason I’m here is actually because of LBS alumni. It’s got that personal connection to it, and I think that’s great. I think also it encourages me to want to give back in the same way.”

Tariro, too, felt the connection. “I feel like I’m borrowing from someone that I know. That sense of community means I would do anything to pay back the loan – to make sure that other students get the same opportunity that I got.”

Engagement, transparency, and connection run through the company which has grown from a team of three to a company that currently employs 130 staff, representing 25 different nationalities throughout their offices in Cape Town, London, and New York. And, Prodigy Finance will continue to grow; they’ve just secured R3.19 billion in additional funds that

will be directed to new student loans, as well as options for refinancing existing, unfavourable loans.

According to Cameron, “the investment will allow us to double the size of our student portfolio. We believe in financial inclusion and talent mobility and look forward to continuing to help international students break the funding barrier and further their education at top schools”.

To date, Prodigy Finance has provided over $325 million in educational loans to over 7,100 students – and 78 percent of them come from developing markets where access to financing is often limited.

And, although the first few loans were disbursed in 2007, five students have already repaid their loans in full and have begun investing in the next generation of Prodigy-Finance funded students. After all, getting into grad school should be the hard part; geography and wealth shouldn’t hinder those opportunities.