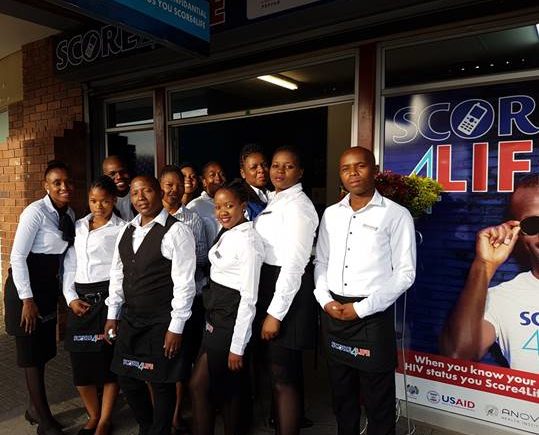 Caption: The Score4Life team consisting of counsellors and health promoters at the Score4Life store at Alex Plaza, Alexandra, at the official opening of project on World Aids Day last year.

The Anova Health Institute’s Score4Life campaign, supported by the Johannesburg Health District, has proven to be the most successful NGO intervention in identifying HIV positive men in South Africa.

Over 25 000 men have been tested through the programmes’ four semi-permanent pop-up stores at malls in Alexandra, Lenasia, Roodepoort, and Soweto – since the campaign’s inception in July 2016.

Although an estimated 14% of all sexually active South African men are HIV positive*, traditional HIV testing methods such as mobile testing and health days, only deliver an average positivity yield of 3%. Score4Life, which targets men aged 30 years and older, requires participants to present proof of identification to ensure unique testing results deliver a positivity yield of more than double this figure (7%).

“Score4Life was created to engage older men, as they are one of the biggest drivers of HIV transmission in the cycle of infection,” says Dr Diana Mokoena, Programme Manager, Tirisanong, Anova Health Institute. “A high incidence of transactional sex results in young girls becoming infected by older men who are already HIV positive. These men, known as ‘blessers’, give girls an array of gifts and services in exchange for sex,” she explains.

“It is estimated that about 60% of men do not know their status, and HIV prevalence peaks to 29% in men between the ages of 35 and 39. Knowing ones’ status empowers individuals to make the right choices to prolong their lives,” says Dr Nombuso Madonsela, Acting HIV and AIDS, STI And TB (HAST) Deputy Director, Johannesburg Health District. “Testing is, however, just the first step in the HIV prevention and treatment process,” concludes Madonsela.

All three of the pop-up stores that are currently active – namely, Alexandra, Lenasia and Soweto – are equipped with a consultation room and a qualified nurse to issue antiretroviral medication to clients free of charge, successfully linking the identified positives to treatment.

“A high incidence of transactional sex results in young girls becoming infected by older men who are already HIV positive. These men, known as ‘blessers’, give girls an array of gifts and services in exchange for sex.” – Dr Diana Mokoena.

“We believe that the success of the project can be attributed to the fact that queue-averse men don’t have to wait long to be attended to, and that our staff are well trained and professional,” says Michael Baretta, Managing Director of [dot]GOOD, the marketing and implementation agency that conceptualised and manages the campaign on behalf of Anova. “We gave a lot of thought to creating a visually appealing brand identity for Score4Life and a space where clients can be tested in a safe and confidential environment,” he continues.

Score4Life offers free HIV testing and treatment and is being funded by the US President’s Emergency Fund for AIDS Relief (PEPFAR) through the United States Agency for International Development (USAID) and the DREAMS Programme.

About the Anova Health Institute

The Anova Health Institute is dedicated to strengthening and improving public health services, with a particular emphasis on HIV. A trusted partner in capacity building and the provision of technical support to the National Department of Health, Anova has a reputation for innovative responses and ground-breaking research in HIV.

[dot]GOOD is South Africa’s foremost for-good marketing and PR agency. They engineer platforms and opportunities for brands and not-for-profits that reach organisational objectives. Their mission is to create a community of social change makers who are driven by purpose as much as they are by profit.