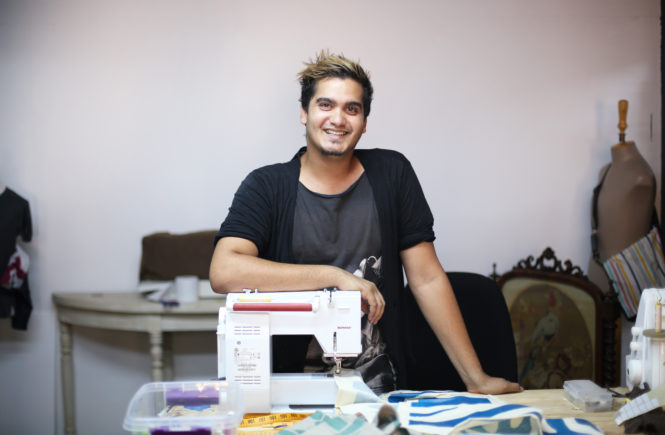 Zaid Philander is on a mission to change the world one stitch at a time, writes Eugene Yiga.

As a boy growing up Woodstock, Cape Town, Zaid Philander was fascinated with little inventions, and sewing. So much so that he often got a spanking for taking things apart and losing interest when he needed to put them back together again.

“I had a lot of interests,” he recalls. “For a long time I wanted to be a veterinarian, then a food technologist, and also an interior designer. And in my younger years, I wanted to be a space monkey that tests plumbing with Batman!”

Both his parents worked full-time and were determined to support their five children, which resulted in his mother turning to craft to earn extra income.

With his folks busy at work, Zaid developed a close relationship with his elder sister, who learned how to cut, sew, and design from books before she moved on to an Italian dressmaking school.

While other children played ‘blind man’s bluff’, Zaid chose to be ‘blinded’ by sewing hems by hand, cutting brown paper patterns and stitching on buttons. This was his sister’s attempt at keeping Zaid busy by teaching him how to unpick hemlines and doing cuttings: the work every seamstress dislikes!

“The first time my family bought an industrial machine, I was seven and too short to reach the pedals,” he says. “So instead of feeling despondent and giving up, my sister and I created a contraption made with a crutch and a hosepipe. The crutch would tie to my elbow and hit the pedal while my feet would dangle in the air.

“I would sew with one hand pressing onto the crutch and the other guiding the fabric into the machine. I decided that day that I wouldn’t want anyone else to feel that they are limited due to a physical characteristic.” 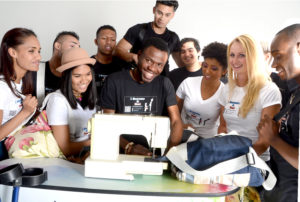 After a few hours, Zaid was sewing his first set of hand puppets with the manmade contraption using his elbow. He then advanced to making simple garments and projects for neighbours, family, and friends. But even though he says sewing was second nature to him, there were challenges.

“In my earlier years I was discouraged as during that time everyone lost their jobs in the CMT (cut, make, and trim) industry as South Africa opened our labour gates to China and we lost several clients who chased cheaper labour solutions to their wares,” he recalls. “I was also teased by peers for wanting to sew as it was seen as a woman’s career. So I did it for myself alone, as it brought me joy.”

At age 20, Zaid studied environmental awareness with great results. He was even nominated and selected as a Climate Change Champion through the British Council Project, ‘Low Carbon Futures’.

Inspired by the project and due to his nature-loving days as a boy scout, he chose to mix his two passions together and decided to start his own company, creating bags in the most planet-friendly way he could think of and developing an environmentally-conscious movement within the fashion industry.

Today the company, called I Scream & Red, not only produces bags, but also teaches people with disabilities how to make them and plans to grow the initiative even further.

“We teach people with disabilities how to design bags made from recycled seat belts, reused upholstery, and rejected sample fabric books,” Zaid says.

“All our makers are taught within their homes, eliminating travel time and allowing them to work in a pressure-free environment on a flexi-time basis.They create a product that is made 100% with love and with the skills to sustain employment to significantly improve their lives.”

Creating a planet-friendly movement within the fashion industry

I Scream & Red sources all materials within the vicinity of production to minimise carbon emissions on each product. It also engages in activations around people with disabilities, teaching them how to design and start businesses of their own.

The company offers sewing classes, any CMT services to the public, and even screen printing with non-toxic pastes, using selections of organic cottons for the stitching and lining.

“We pride ourselves in being a planet-friendly company whilst doing it in a socially responsible way,” Zaid says. “I strive to inspire, sew, and create a planet-friendly movement within the fashion industry, one stitch at a time.”

“As a young boy I was told that sewing is for the opposite sex and that I did not fit the profile,” he says. “Yet against all odds – my length, my strength, and apparently my gender – I accomplished what I wanted: to sew. Today I train people with disabilities to sew these planet-friendly items as I can relate to how society puts limitations on you. Now my task is not only to prove them wrong, but to inspire others to do whatever they believe they want to achieve. For me, the choice began with a needle and thread.”