Draw your customers in before you can sell them 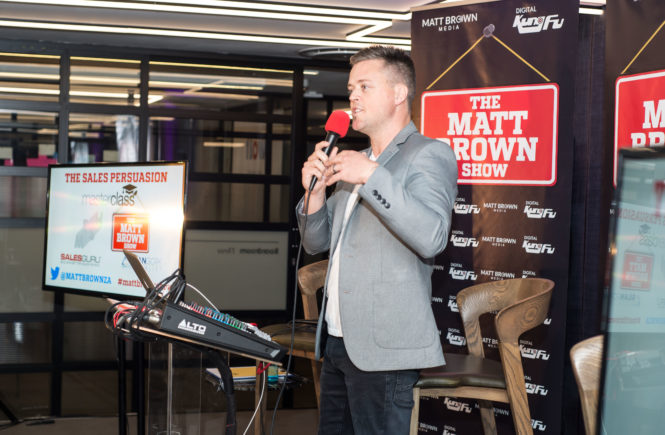 Less sell and more engagement is where real results are found, according to Sales and Persuasion Masterclass

Off the back of seven sold-out shows, the Matt Brown Show (in partnership with the Influence Institute and Sales Guru) did it again. Last week saw over 150 business owners, entrepreneurs and sales executives converged on the Mesh Club in Rosebank for the latest Matt Brown Show – Sales and Persuasion Masterclass.

The Matt Brown Show yet again brought only the best experts on the subject matter for its audience. Gilan Gork, Expert Mentalist and Mark Keating, CEO of Sales Guru provided some valuable insights on the topic of how to influence and persuade in a business environment.

Both panellists agreed that being in a sales role in 2018 is much more difficult than a decade ago. This goes for selling in ideas to decision makers as well as products alike due to the highly competitive environment everyone finds themselves in.

Starting at the basics of sales, Keating listed the top four reasons people will buy something.

These factors seem pretty obvious when looking at them, but Keating and Gork both cited that there is a serious lack of sales skills and effort by salespeople today. People need to be trained and given the right skills to equip them to offer clients all four factors listed.

Competency ranked first with buyers. No-one will buy anything if they do not believe the person selling it to them can actually deliver on what they’re selling. Tying into this was Gork’s MRI3 Framework. The premise of this model is based on positively answering three questions everyone subconsciously asks themselves when faced with a salesman.

If a salesperson can answer all three questions positively in their “sales pitch”, they will attain ultimate influence. It’s human nature to trust and deal with people who are perceived as reliable, capable and caring. The latter is the most important in the sales environment. It’s important to build a rapport with decision makers as this leads to trust, which in turn results in sales. “This can be applied not only in sales, but to people in their personal capacity too,” said Gork.

Matt Brown, CEO and founder of Matt Brown Media agreed. “Trust is earned in drops, but is lost in buckets,” he commented. Brown is a big believer in putting in the time to build long-lasting relationships with clients because this is the only recipe for success in the long term.

“Trust is earned in drops, but is lost in buckets.” – Matt Brown

Keating made a surprising statement when he said the telephone remains a sales person’s greatest tool. The problem is that very few people are comfortable with it because of the rejection it brings so often. “It’s important to remember that people don’t reject you, but rather what you are saying,” explained Keating. “It’s nothing personal, they’re just not interested in what you are telling them.”

In order to get people to stay on the phone for longer or answer that email, salespeople need to create a perceived value for their product right off the bat. Decision-makers should see the relevancy from the start. The only way salespeople can do that is by researching the person and their needs before making that call.

“All people want is for their experiences to be validated, and that’s as easy as saying I understand your situation because of XYZ,” commented Brown. “This makes you relatable to the person on the other side of the phone and already starts building a rapport.”

Gork finished off by explaining that people are hypersensitive to relevance in the internet age, and automatically block things out that aren’t relevant to them. It’s of utmost importance to understand someone’s needs before approaching them.

After the show, the founder and CEO of Mesh Club, Jonathon Meyer had a bit of a surprise for everyone. Meyer was extremely generous and is giving the public a one-month free trial membership at the Mesh Club to the value of R3,750. You can access the offer by clicking on this link.

“Sales and persuasion is an integral part of entrepreneurship. With the core MESH membership base being entrepreneurs, we were so excited to host the Matt Brown Show at our venue. Advancing the community by creating connections and hosting events like these is a key focus of MESH,” said Meyer.

The audience and those watching the Matt Brown Show on the live stream on YouTube walked away with a lot to think about and to put into practice. Watch the full show here to get all the tips.