Luke, I am your Father’s… Day reminder? 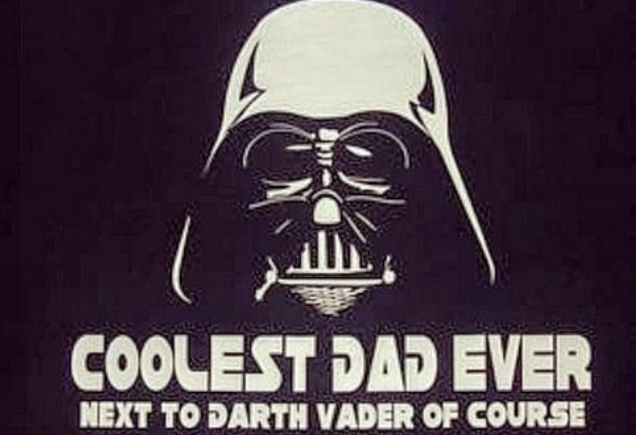 Don’t panic if you’ve forgotten! Here’s a last-minute Father’s Day gift guide to help you sift through the socks and neckties to find the gifts dad will really give the thumbs up to. After all, your dad’s probably had your back for your whole life, so this Sunday is the perfect chance to say thanks (and to apologise for that time you ‘borrowed’ the car without asking.

It doesn’t even have to be your real father, of course – it could even be the man (or woman) who was a father figure to you. Luckily, you’ve still got a little time left to give some thought to what gifts would bring a smile to dad’s face and what his idea of fun or cool is. Is he a tech boffin, a master chef or a gaming geek? Does he rule the remote or is always tinkering away with wood and chisels in his shed? The best way to win at Father’s Day gifting is to treat your father or father figure to something that quintessentially speaks to who they are.

Hope these ideas help you out for Sunday…

For the comic-obsessed dad:

The last few months have blessed us with some excellent comic book movies (thanks, Marvel) which have been huge hits with moviegoers and critics alike. Deadpool 2, Avengers: Infinity War, and Black Panther all hit the big screen recently and it just so happens that two of the three – Infinity War and Black Panther – feature critical father-based storylines. If your dad is a fanboy who’s already watched the movies several times and can dictate every line of dialogue along with the characters, he’d probably appreciate some cool merch.

There’s this super cool Deadpool mug, or this awesome 3D deco wall LED light which looks like Iron Man’s hand is smashing through your wall, or this mega cool Black Panther King T’Challa necklace that may or may not hold the super suit inside it (spoiler: it doesn’t).

For the dad who considers himself a home chef:

Whether it’s MasterChef, Chopped or the Great British Bake-off, everyone has a favourite cooking show that makes them want to unleash their inner chef. If your dad sees himself as a bit of a Jamie Oliver, then he’ll need some kitchen staples to get him started – and maybe a few cool foodie gadgets. He definitely needs a decent blender to whizz up smoothies, soups or sauces. Check out a few options from Teljoy. Or go all out and get him a super fancy gas stove (don’t worry, the price won’t kill your budget).

On the gadget side, if your dad is the type who talks about tannins and French oak barrels and tasting vanilla and smoke in his cab sauv then he’ll love this fancy wine tools box set. It’s got a wine thermometer (who knew you’d ever need a wine thermometer?!).

Or, for the dad who prefers a cold beer and hot coals, these nifty silicone oven gloves are perfect for the kitchen or braai.

For the dad who loves to game:

He knows what his UHD from his LED and he isn’t making a juvenile joke when he’s talking about “55 inches”.

He loves binge-watching Grey’s Anatomy (he needs to know if Mere will ever find true happiness, okay), Game of Thrones, and rugby replays because he’s a well-rounded sort of guy. He needs a good TV screen. Nay, a home theatre system!

Suss out what he’s looking for and check your options. For this, a price comparison service like PriceCheck can do all the legwork for you. Or if you don’t have R20 000 to drop on a whole new TV and sound system, try Teljoy’s rent-to-own option. It comes with a maintenance plan and you can use their EasyFix Repair service should your dad ever damage it. If you think he’d fancy a bit of gaming, Teljoy also lets you rent-to-own an Xbox or PlayStation (or get them both!) and they throw in a few games. In celebration of this year’s FIFA World Cup, and to rekindle the joy of South Africa’s hosting, get your dad an EA Sports FIFA 2010 World Cup game.

For the dad who prefers to be outdoors:

Maybe your dad doesn’t want stuff. Maybe he wants to just spend some time with his family and be out in nature. We’re lucky to live in a country boasting some of the best natural scenery in the world. Pack a picnic basket and go for a vigorous walk in the mountains. For instance, if you’re down in the Western Cape, Cape Point boasts a few braai and picnic spots, as does Sanparks or numerous other outdoor spaces all across the country. If he’s a committed braai guy, he needs this braai LED light so he can get his cook on day or night. Perhaps your dad loves making memories and wants to experience fun stuff – then gift him an outdoor Airbnb Experience that will ensure that he has something to remember forever.

The dad who likes to be pampered:

Modern day parenting is hard. You have to put up with the tweeting and YOLOs and surely that’s a chocolate ice cream emoji – and that’s besides all the really hard stuff like hormones and broken teen hearts.

If he has to deal with this and much more, get him a relaxing spa treatment. African Pride is one of those offering a spa treatment that includes bottomless (!) sparkling wine, lunch and a full body massage.

For the dad who appreciates good food:

We are blessed with a huge variety of incredible restaurants in South Africa. Fortunately, Father’s Day falls in the colder months, as do winter specials when SA’s top restaurants suddenly become much more affordable for locals. This tip is more for the moms who are doing the real planning for the “kids to take dad out for lunch”.  For example, Cape Point’s Two Oceans Restaurant has a special on till 31 July which gets you a free kids meal for every main meal ordered. They also offer a free Funicular ride for every adult ticket purchased so that’s Father’s Day sorted if you’re in the Mother City.

For the do-gooder dad:

Your dad’s the type who’s always running around helping others – and not for personal gain. For him, happiness comes from making the world a little better for other people (or other creatures). There’s some kind of cause he’s deeply passionate about. He would love a Relate bracelet. You can buy one of their bracelets in support of a variety of causes, whether it’s conservation, education, poverty alleviation and so much else. What makes it even better is that part of the proceeds of every single bracelet sold goes to the elderly folks and at-risk youths who make them. So you’re probably helping even more dads! Score!