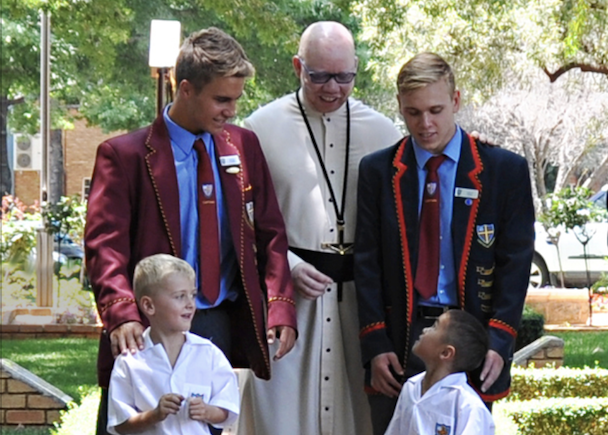 Despite the loss of many weeks of in-classroom teaching due to the COVID-19 pandemic in an unprecedented academic year, the St Benedict’s Class of 2020 has once again produced an impressive set of results in the IEB National Senior Certificate exams.

Two St Benedict’s boys achieved averages over 90% and eight boys are among the country’s highest achievers in particular subjects. With a distinction ratio of two per student and a 97.27% bachelor degree pass rate, there is much to celebrate. Notwithstanding this, the most incredible coup is that against all odds, these boys managed to retain the school’s 100% pass rate – bringing this record to an all-time high of 46 consecutive years!

Commenting on the results, the College Headmaster, David Jeffrey, says, “This is a solid set of results and the culmination of years of hard work. As if prophetic, ‘Young man I say to you arise’ was our school’s theme in 2020, and this is exactly what was asked of this group of matriculants. In our school’s history, no other group of students has completed their high school career during a global pandemic. There were no signposts to success and at times the challenges to be overcome felt insurmountable. But the class of 2020 showed incredible determination and their resilience is reflected in the marks they have produced.

“Their dedication to get to this point will serve as an example for generations to come. We could not be more proud of how they persevered and answered the call to rise up. Now, we encourage them to take on the world and go and do the great things they are called to do,” says Jeffrey.

“Our strategy at the College has always been one where we invest many hours of extra tuition with each and every student to help him realise his full potential. The pandemic could easily have derailed this methodology but our already well functioning digital systems, our Catholic ethos, a decisive and agile executive team and our approach to risk taking, ensured that this could continue. The net result is that every one of our pupils has qualified for tertiary studies which is a massive advantage in a world where education is prized above all else,” says Jeffrey. “We are incredibly grateful to our dedicated teachers who went above and beyond the call of duty to help our boys cross the finish line. They kept our students motivated and inspired them to stay the course. Of course, we cannot take away from the hard work and the commitment of our young men in excelling in these final exams and while every boy is a success story there are a few who deserve additional accolades.”

With an enviable average of 92.4% and eight straight A’s, Matt Oosthuizen clinched the position of top Grade 12 student at St Benedict’s. He is listed on the IEB’s Commendable Achievers List which means he is ranked among the Top five percent nationally in five of his subjects and also achieved a distinction in Life Orientation. Aiden Plotz also did himself and his school proud by achieving a 90% overall average and an A in eight subjects in addition to achieving being placed in the Top one percent nationally in Business Studies.

Other top students who really shone in their finals include: Akhil Govan with an 88.4% average, eight distinctions and being amongst the Top one percent nationally in Mathematics; Jacques Theron, Ricardo Coelho and Gordon Grossett all banked eight distinctions with overall averages of 89%, 87.4% and 86.1% respectively.

The entire St Benedict’s community congratulates these achievers who after years of preparing and working were called upon in their matric year to continue to perform under the most challenging of circumstances. The candidates are all acutely aware that the results of their labour this year could greatly determine their future success.

Oosthuizen – a passionate academic who has already penned his first novel – will study medicine this year. He says “I wouldn’t be where I am if it wasn’t for St Benedict’s. The school builds character.” His advice to his peers and the Bennies boys yet to continue their matric year is, “Don’t have any regrets.”

More than just academic scholars – all these top performers are also all-rounders who made significant contributions to the school’s rich sport programme and developed important life skills through their participation in the vibrant cultural life of the school. Grossett was an integral part of the St Benedict’s Pipe Band, which won the national Championship three times during his high school career.

More than just academic scholars – all these top performers are also all-rounders who made significant contributions to the school’s rich sport programme and developed important life skills through their participation in the vibrant cultural life of the school. Grossett was an integral part of the St Benedict’s Pipe Band, which won the national Championship three times during his high school career.

Renowned for an unprecedented run as SA Rowing Champions for 27 consecutive years, personal success and team excellence is nothing new to St Benedict’s. Although a holistic approach is adopted, the core focus has always remained academics – with 2 895 distinctions recorded the past 13 years. During this same time frame, an impressive 26 boys have been listed as IEB Outstanding or Commendable Achievers.

In closing, Jeffrey adds, “Humanity constantly faces new challenges; new normalities with multiple situations that require ingenious solutions to survive. Thanks to COVID-19, the class of 2020 has been trained to find them; they are equipped with a unique set of skills that will serve them well as they go out into the world -ready for the next chapter of their lives. It’s an exciting time and we are confident they have the skills they need to scale great heights in the pursuit of their dreams. If history is to be believed, like so many of our alumni, we are expecting to see change-makers and leaders born out of this group. We wish them all well as they forge ahead – knowing they are in charge of their destinies and will fashion bright and fulfilling futures.”

For more information on the school’s results – go to www.stbenedicts.co.za or Facebook: @stbenedictscollegebedfordview.

Highlights from the Class of 2020 Results:

The following boys achieved results in the top 1% nationally within a subject:

●        Ayrton Griffin-Ellis obtained seven distinctions at an average of 84.3%

Among the many alumni, a few include: