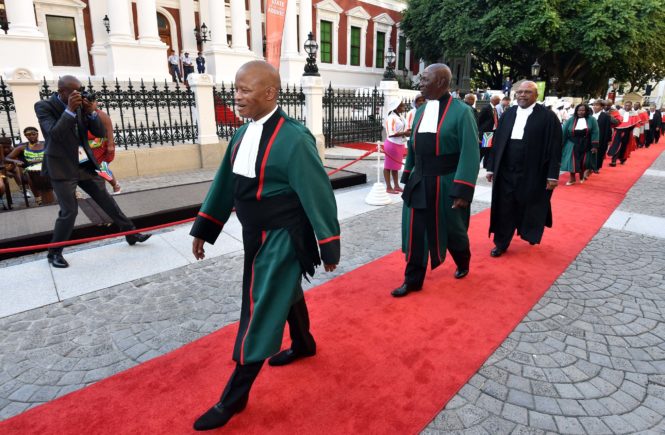 Chief Justice Mogoeng Mogoeng: an example of South African exceptionalism to be proud of.

While it is right and fitting to beware tales of exceptionalism wherever they come from, when such stories are borne out in facts then there is little harm in a little chest thumping.

Now in its 21st year of existence, the South African constitution is an exceptional document and continues to be hailed as one of the most liberal and progressive charters in the world.

In April this year I had the privilege to interview the Chief Justice of South Africa, Mogoeng Mogoeng, on the sidelines of the Conference of Constitutional Jurisdictions of Africa (CCJA) in Cape Town. The CCJA is an independent institution established by constitutional judiciaries in Africa, to ensure that the judiciary in each member state supports and deepens democracy by upholding constitutionalism and the rule of law.

“We are energised to make sure that our constitutional democracy is not a democracy in name only, but it’s a real democracy.”

During the April Congress in Cape Town, Chief Justice Mogoeng was elected chairman of the CCJA. Chief Justice Mogoeng put in words and gave examples of just how important South Africa’s judiciary and laws are to Africa and indeed the rest of the world in terms of legal input and governance.

He added, “Now, because our experience was very painful and is still relatively fresh, we are energised to make sure that our constitutional democracy is not a democracy in name only, but it’s a real democracy. The role that we can play, and have in a very small way begun to play already, is to share our experiences in terms of the progress made in terms of strengthening our democracy with sister countries in Africa, to say: This is what we’ve been able to achieve. If you think it can work for you, please by all means we are willing to share our experiences with you.”

Without going into too much detail, the Chief Justice said there were countries from around the continent that had borrowed heavily from South Africa’s jurisprudence.

“We know of some countries that came to South africa and said: Look, the way you appoint judges is commendable. How do you go about it, because we would want to bring about similar changes in our own country. And we know – I don’t want to name names – but we know of a country that has adopted a judicial appointments mechanism that is virtually identical to that of South Africa.”

Again without naming names, the Chief Justice told of another country which in recent years called on the South African judiciary for advice on how to set up a constitutional court and then went back to establish a court as advised by the South Africans.

“And [there have been] others who want certain improvements on the operations of their courts have approached us and said let’s have a discussion on how to go about doing this. [There are] others who are looking at taking the institutional independence of their judiciary several steps forward have come to look at the office of the chief justice [which is] our administrative arm and said: Look, we’d like to learn more from you about your structure. How does it operate?

“So in that way, we’ve been able to play a meaningful role at a regional level, at a continental level, and even some jurisdictions outside of Africa have approached us for intervention. You’ll be amazed to learn that whenever the European conference [or] the Asian conference have got their meetings of their associations of chief justices, they have almost without fail invited South Africa as the only African country to come and make an intervention, to come and exchange views with them in relation to how best their systems could be improved.

“This year in January we had a meeting with the European Court of Human Rights and at least two jurisdictions asked us: What suggestions do you have as South Africa, because we know that in your own country courts enjoy independence. And we’ve had the opportunity to share some views with them

“We were also humbled to learn from the jurisdictions represented at the European Court of Human Rights that our jurisprudence, our case law, is often referred to at that level, at a continental level there.”

Part of the reason for the existence of the CCJA, is the exchange of best practices. Members share experiences and strengthen each other and this is what has enabled a significant contribution to the development of the jurisprudence of member countries.

The Chief Justice feels that there is hope that Africa could one day be a stronghold for the rule of law around the world.

“If only we can be united in the vision that has long been waited for: the vision of demonstrating to all that African people have what it takes to take their continent to the greatest heights that it was once known for,” he said.