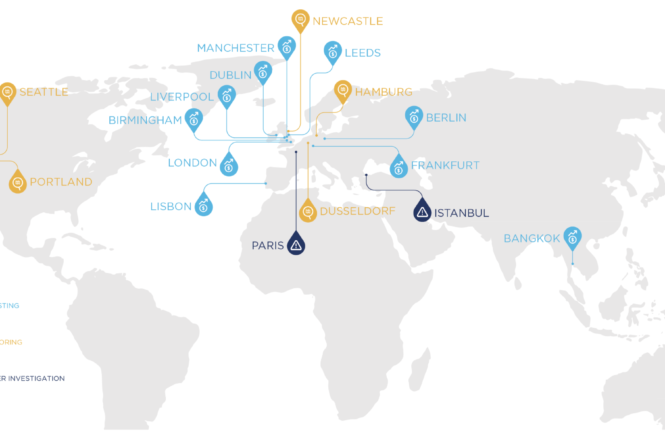 The strengthening of the Rand against other major currencies offers a great opportunity for South African investors to purchase international properties.

Although London holds firm as a sure bet for property investors with rental growth in Greater London expected to increase by a further 16.4 % over the next three years, England’s resilient North has emerged as a strong contender in the property market. The property boom in the North has, in part, been bolstered by a government strategy known as the Northern Powerhouse initiative, which is beginning to pay dividends in the region.

“The recent strengthening of the Rand against other major currencies offers a great opportunity for South African investors to purchase international properties with the intention of leasing the unit out to cover the bond,” says George Radford, Director for Africa at IP Global. “For any savvy investor, the GREO is an invaluable resource on which cities to bank on in 2018.”

“The recent strengthening of the Rand against other major currencies offers a great opportunity for South African investors to purchase international properties with the intention of leasing the unit out to cover the bond.” – George Radford, IP Global.

Once again, the UK features prominently in the report. Regarded as the birthplace of the Industrial Revolution, England’s North has a history of innovation, but the decline in heavy manufacturing over the years had led to a reduction in jobs and a broadening of economic disparity between the North and South. “Things have begun to change in recent years with the introduction of the Northern Powerhouse concept, which has been credited for driving job growth, investment, and positive market sentiment,” says Radford.

Radford explains that with rapid growth taking place, the urban land values in Manchester rose 24 % last year, compared to the 4 % national average. “In addition, the price of homes has also risen by 8.6 % between 2016 and 2017, which is more than double the national average.”

Manchester’s booming property market has attracted a host of international buyers. In a rebounding Northern economy, these investors can expect to receive higher rental returns over the next four years.

“The demand for well-located rental stock is driven by a large working population, continually fed by a stream of new university graduates,” says Radford, who points out that rent is forecast to increase by 22.8 % from 2018 to 2022.

The Northern Powerhouse concept which is spurring the property boom in Manchester and Liverpool has reportedly delivered more than 8 000 jobs over four years.

“There are also plans to revitalize the economy through investment in transport infrastructure and 5G technology, which will create an enabling environment for businesses to flourish,” Radford explains.

“There are also plans to revitalize the economy through investment in transport infrastructure and 5G technology, which will create an enabling environment for businesses to flourish.” – George Radford, IP Global.

Liverpool is one of the UK’s best-performing property investment locations with average rental yields of 6.2 %. Liverpool is the second largest regional economy, boasting notable gains in employment and a growing housing sector. “With a large student population, many of whom are expected to enter the job market, demand for rentals in the city is expected to rise,” says Radford.

According to the report, London continues to be one of the world’s leading business capitals, and a degree of confidence is returning to the market after the initial shock of the Brexit vote. Even though it’s regarded as an “alpha city,” London remains amongst the most competitively priced cities in the world. PwC predicts an additional 1.8 million homes will be privately rented by 2025, while rental growth is also likely to rise by a further 16.4 %.

Elsewhere in Europe, Berlin continues to present itself as a promising destination for property investors, according to the GREO report. The dynamic city, known as the main start-up hub in Europe, is expected to draw nearly 400,000 new residents by 2030.

Germany’s financial hub of Frankfurt is vying to take up London’s mantle when Britain leaves the common market. In the process, the population has been steadily increasing. Demand for new homes in this growing city has continually outstripped supply; this is having a profound effect on sales and rental markets.

Moving further afield, the residential market in Bangkok has witnessed strong demand from both local and foreign buyers. “The high demand for houses in a city where disposable income is much higher than the rest of the country, has the effect of driving up property prices,” says Radford. “This has led to growth of 16 % in the past five years and healthy rental yields.”

The Global Real Estate Outlook by IP Global can be accessed here.