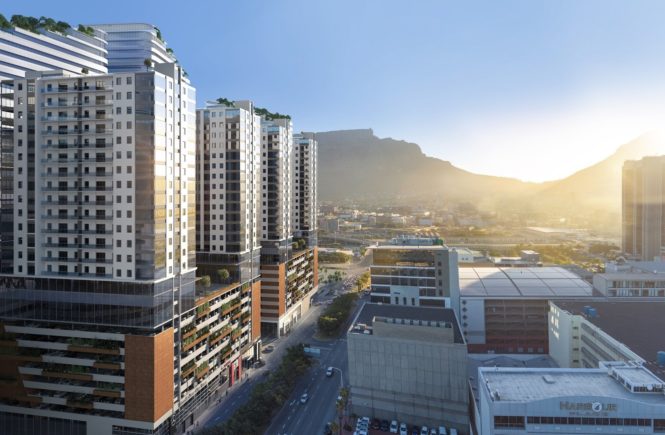 Soil has been turned on the Amdec Group’s ground-breaking R15-billion Harbour Arch precinct on the site that previously housed the Mother City’s Culemborg automotive dealerships.

Early purchasers will be reaping the rewards of buying into Harbour Arch, but there is still value to be had with the second tower launching this year. It competes on a global scale in terms of quality and innovation, which means there is a fair expectation of it yielding consistently strong returns on investment.

“The key to a development such as Harbour Arch is the fact that we take international best practice and bring it home to our South African context, creating world-class mixed-use precincts that offer a lifestyle on a par with the best in the world,” says Nicholas Stopforth, MD of Amdec Property Developments.

The Amdec Group portfolio includes the award-winning Melrose Arch mixed-use precinct in Johannesburg, and The Yacht Club in Cape Town, their latest project, valued at R1.5-billion.

“What we do best,” adds Stopforth, “is ensure that investors – especially those who understand the successes of other similar mixed-use developments abroad – are able to access the same kind of quality and value locally, that international examples such as Hudson Yards is creating in New York City.”

“The key to a development such as Harbour Arch is the fact that we take international best practice and bring it home to our South African context.” – Nicholas Stopforth, MD, Amdec Property Developments.

Hudson Yards is a $25-billion (R360 billion) mixed-use redevelopment of more than 6,380m² of residential, office, retail and public green space spread across a footprint of just under 11ha. The first phase opened in March this year and current projections put nett revenue in excess of $21-billion (R300 billion) for the city, including more than 3,000 new residential units, accounting for 28% of all new housing in the area. It is also considered a “tech forward” development for its innovative sustainability and technology solutions.

Other successful examples of the kind of development that Harbour Arch represents, include Canary Wharf in London and Darling Harbour in Sydney. The Amdec Group’s Harbour Arch will revitalise an area of the Foreshore in similar fashion by breathing life into a largely underutilised part of the city.

“This area is out of step with the many new developments that are springing up in the CBD,” says Stopforth. “Harbour Arch will bring vibrancy to this area by creating a sought-after lifestyle that lets you live, work and spend your downtime in close proximity.”

Harbour Arch will span 5.8ha, with 2,500 residential units above an eighth floor public podium, with convenience retail, offices, and two Marriott International hotels. Some of the existing automotive showrooms will be accommodated on-site.

The Amdec Group employs extensive and innovative sustainability solutions at The Yacht Club and Melrose Arch developments, and Harbour Arch will run along the same lines. Upon completion, it will boast the latest in recycling, low-energy lighting and water-wise systems. It will make extensive use of natural light and even harness wind power from the southeaster. There are plans for a desalination plant of the kind currently in use at The Yacht Club, where it produces enough freshwater daily for the entire building, and there is sufficient capacity to service the buildings in its immediate surroundings, if needed.

Harbour Arch will be on a par with the best of its international peers, both in terms of connectivity as well as safety and security. Security is a major consideration for cities around the world. To this end, the state-of-the-art setup at Melrose Arch, which is already in operation at The Yacht Club, will also be implemented at Harbour Arch.

“For developers, these features have become standard and they form as much part of the planning and design of the precinct as the architecture. Our top priority is to keep people and places safe, but it also has implications for our purchasers and investors because they too should have confidence in the development,” says Stopforth.

“Downturns in economic cycles are invariably followed by upturns, so it makes sense for us to build now so that our purchasers and investors are in a favourable position when the recovery commences. It might seem counterintuitive, but that’s why it makes sense to buy into quality developments now, so that you can reap the rewards when the market recovers,” Stopforth concludes.