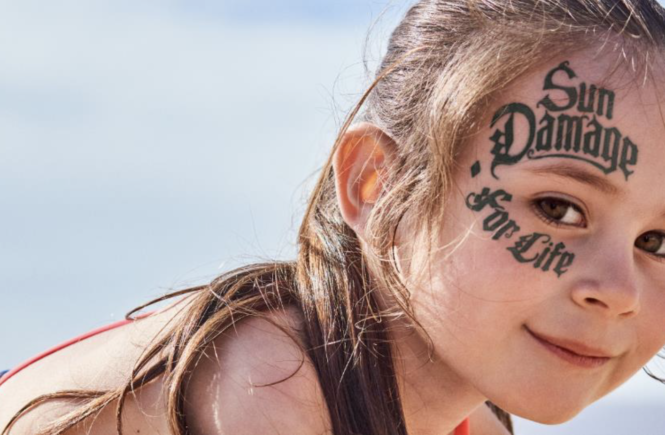 A new Suncare Campaign has been launched with the aim of leaving a permanent impression on parents.

Figures released in March 2018 by Soltan (the UK’s No1 5* UVA protection suncare brand) show that over half (51%) of parents choose a sun cream based only on its SPF rating to prevent sunburn, without realising the significance of the star rating that indicates protection against long-term, permanent skin damage caused by UVA.

The research has been released as Soltan launches a controversial and thought-provoking campaign that aims to help parents understand the risk of exposing their family to UVA damage that is as permanent as a tattoo if they use a sun cream with less than 5*UVA protection.

The survey of 1,000 parents of children aged 14 and under revealed that while 87% of parents understand that it is possible to get permanent skin damage from the sun, 40% believe that UVA damage is short term and lasts no longer than a week.

40% of parents surveyed believe that UVA damage is short term and lasts no longer than a week.

The lack of parental understanding of the dangers of UVA rays comes despite previous education campaigns by brands, charities and the public sector. In fact, Soltan’s research showed that:

The research shows that whilst parents do all they can to protect their children from sun protection, with 2/3 reapplying sun cream after every time their children have been in the water and 80% of parents making sure their children wear a hat as well as sun cream, the lack of awareness of the need for 5* UVA protection means they are still at risk of permanent skin damage from the sun Combined with the fact that nearly a quarter (123%) of a person’s lifetime sun exposure is acquired before age 18 there is a real need for regular and effective sun protection.

Soltan’s new, hard-hitting campaign aims to leave a lasting impression on consumers, jolting them into action. Timed to coincide with the start of Spring, during which time over a fifth of annual UVA-related skin damage occurs, Soltan’s shocking new “tattoo” campaign will be appearing all over the UK.

“At Soltan we believe that there should be no compromise where sun care is concerned. Obviously, parents are already thinking about sunscreen but we’re encouraging them to make sun protection a top priority this summer, and only choose 5* UVA protection. Either you have fully protected your family with a 5* rated sun cream or you haven’t,” Soltan Suncare Expert, Clare O’Connor. “Many leading sun care brands only offer a 3* UVA rating, allowing up to 40% of UVA rays to penetrate the skin. Soltan is the UK’s only suncare brand that offers 5* protection for the whole family, preventing up to 100% of UVA from permanently damaging skin.”

To raise awareness of the long-term effects of UVA damage, Soltan is staging a provocative and informative exhibition open to the general public, at White Space Gallery in London’s Leicester Square on Friday 23rd March 2018.

* Research conducted by Mortar Research between 8th and 12th March 2018